It's been a while since I posted.  Confronting breast cancer is one of many reasons why. On September 2nd, 2021 I had the cancer removed from my left breast.  I'm lucky that it was small (6mm), slow growing and "well-behaved" and that all was removed with no questions remaining.  I was one in every 8 women that get breast cancer in the US.  Shocking statistics!  This all has been, at times, overwhelming. I was out of it from the anesthesia for several days after my out patient 'Twilight Sleep' surgery.  My incision healed well but has left me with a 3 to 4 inch scar to remind me of the day.  I no longer match my early nude photos here.  Lots of changes before that too, as age will do.  The 'cancer medical machine' helped me and was also part of what overwhelmed me.  Happily I've been lifted up by friends and loving healers that lead me to decide not to continue any treatment. None of those friends or healers told me what to do. I chose. The well-behaved nature of my cancer makes me comfortable with my decision.  I know I am very lucky in the type of cancer that showed up and for that I'm deeply grateful!

This has been a pivotal experience that's made me look at my life and make a few new choices.  Here's part of my October newsletter to share some of my process.  Sending you love as you move through your days! 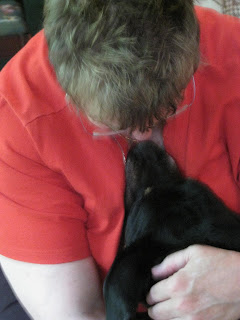 Posted by Sherry Tuegel at 1:42 PM No comments:

I’ve spent my life self-consumed, I’m sad to say. I never was very interested in service or volunteer work. In the 1970s a friend said to me that the ‘yoke’ had walked away. She was referring to the women who had gone to work and no longer volunteered their services. These women had been the yoke that held society together through their volunteer service. After that conversation I frowned upon offering work for free, even though I seldom volunteered prior to that conversation. I wanted to be valued as men were valued and paid for their work. It made me suspicious of organizations that expected volunteerism. Most were run by men who benefited financially and emotionally from the care of their volunteers who were, indeed, mostly women.

Now, late in life, I’ve begun to value service. As I look back on my life, I’m seeing a selfish self-absorbed individual. I’m part amused and part ashamed of the values I carried in my younger years. I was fully enmeshed in the consumer culture and bought into the ideas of winning by making a lot of money. From the part of me that felt inferior I had an “I’ll show them” attitude. I never did. I thought I was definitely out to win and at the same time I was a lazy maverick, quite comfortable with B and C grades. It was more important for me to have fun then to study and work hard. I have a big lazy streak along with a deep desire for pleasure. Food and sex rank high on my list but above all friendship and good conversation.

I was raised by a proper Southern woman. You were to dress and act in a polite socially acceptable manner. Wearing overalls and no bra in front of my grandparents was not acceptable but, of course, in the 70s I did. Part of me has totally accepted the cultural conditioning I was raised in. I have a very functional super ego. The other part of me, the maverick, disdains my conditioning. My super ego wasn't embedded with much drive for volunteerism, however. I don’t remember my parents encouraging me to volunteer other than once or twice for our Quaker Meeting’s yard sale. Maybe it just fell on deaf ears.

Now, at this late age, I hope to be of better service and be less self-absorbed. As always, I’m a work in progress. It’s not that I haven’t offered support and assistance of some kind over the years. I just wish I had been more aware of what I could have offered and had not been so busy trying to mimicking Martha Stewart. For example, in the early 1990s I had a beautiful wedding and have the pictures to prove it. I loved being fussed over by my bridesmaids before the service. It may have been my favorite part of the wedding. I did my best to make Martha Stewart proud that day. During the event my father had to wear a wool tuxedo. He did so even though he was terribly allergic to wool. I glimpsed the suffering on his face when he asked to change before the pictures were taken. Add to that my mother’s Alzheimer’s kept my family on high alert, making sure she was okay. I look back at the selfishness of that day now and sometimes weep.     “I’m so sorry. Please forgive me. Thank you. I love you.”

It’s as if I have lived many lives and most of the time I’ve sung the “me me me” song. Sometime in the early 80s I wrote this little poem that I recite to myself on occasion:

I’m stuck on a self-possessed trolley.

I’d get off the train,

but it feels such a strain,

and leaving seems such a great folly.

I think I’m ready to get off the train!  Please let me know if you see me taking another ride. I'm sure I will.

Posted by Sherry Tuegel at 12:41 PM No comments:

Greetings Beloveds after many moons have passed!

In my recent newsletter I made a confession and wanted to share it here. I was talking recently to a beloved friend who was very worried about her ailing dad. I encouraged her to let the worry go even though I’ve spent most of my life worrying. Yes, I’m a champion worrier and came by it honest, following in the footsteps of my grandmother and mom. As someone said, ‘my life is full of tragedies that never happened’. I’m tired of the ghosts of possible tragedies stealing the light of my present moment. The lead character in the movie 'Fantastic Beasts and Where to Find Them' tells his friend not to worry as they confront one of the Beasts. His friend asks if there is any danger as he is being donned with protective gear. The lead replies, 'yes there's danger, but why suffer twice? So I’m turning over a new leaf and working on worrying less. When I catch myself feeling anxious about what might happen, I stop and remember that I’m imagining and fearing an illusion. I breathe deeply into the now and let it go. My life has a lot more peace and ease these days.

Speaking of worry and danger, Osho, the amazing rascal guru, has a book called Courage, The Joy of Living Dangerously. He says the more we try to be safe the more we're trying to be dead. Life is unsafe, only death is safe since then the fear of pain and death is gone. It's a radical but honest view. Somehow I believed that worry would make me safer. It didn't. It only made me more miserable. So, wish me well on my new 'leaf' and if you catch me worrying point it out so I can let it go!

Posted by Sherry Tuegel at 1:50 PM No comments:

Sherry Tuegel
I want to Love so deeply only Freedom remains.